Ernst Moiré was a mysterious Swiss photographer whose career has been obscured by silence, documentary voids, and misinformation. So much of his life is shrouded in speculation and half-truths that he sometimes seems more like a phantasm than the flesh-and-blood figure who will forever be remembered as the inadvertent inventor of the blur that bears his name. In 2002, Cabinet magazine dispatched literary scholar and detective Lytle Shaw to Zurich to investigate the reclusive figure's life and work. Shaw published his initial findings in Cabinet issue 7, but the puzzle of Moiré continued to vex him, and it is only now, a decade later, that the full story of his continuing investigation can finally be told.

The Moiré Effect tracks the artist from his humble Alpine beginnings as the son of a postal clerk to his fateful founding of a Zurich photography studio in the 1890s and his subsequent role in the lives of a number of curious figures including the legendary Dutch architect Mer Awsümbildungs, the theosophist philosopher Rudolph Steiner, and several members of the old and fearsomely secretive Chadwick family.
Hailed by Harry Mathews as a “complex” and “excitingly” written book bound to “delight” and “entertain,” Shaw's thriller takes readers on a journey through the elegant salons of Swiss palazzi and the dusty bowels of ancient archives, finally ascending to a mountainous conclusion as hair-raising as it is bedevilingly oblique. 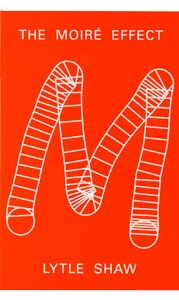