Caroline Knox’s eighth book, FLEMISH, appeared from Wave Books in 2013. Her sixth, QUAKER GUNS, won a 2009 Recommended Reading Award from the Massachusetts Center for the Book. HE PAVES THE ROAD WITH IRON BARS received the 2005 Maurice English Award. She has received grants or prizes from the NEA, the Massachusetts Cultural Council, the Fund for Poetry, and Poetry magazine, among others. Her work has been in American Scholar, A Public Space, Boston Review, Harvard, New Republic, Paris Review, Yale Review, Poetry, and elsewhere; it is anthologized in BEST AMERICAN POETRY 1988 and 1994, and in POSTMODERN AMERICAN POETRY: A NORTON ANTHOLOGY, Second Edition (2013).


Fivehundred places is a press established by Jason Dodge in an attempt to bring new readers to some of the poets that have been so important to his thinking and working over the past decades.

With a single printing of 500 copies, each book will find itself in one of 500 places.

Each Fivehundred places book also features a Dead Scissor by Paul Elliman on its cover. 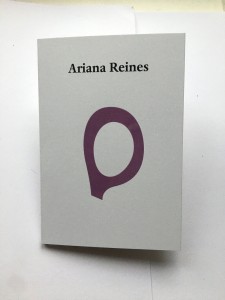 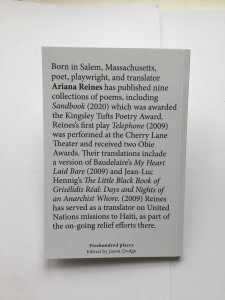